One of the advantages of having adult children is that vacations are no longer dictated by the school calendar. We have also found ourselves more willing to try a vacation that was planned by professionals. This September we tried biking in Tuscany with Vermont Bicycle Tours.

One of our biggest surprises was that virtually everyone on the tour was about our age, mostly with adult children off on their own or in college. Given that this was a very active vacation, it was nice to be with people who were all fit, were from all over the U.S. and Canada and were interested in exploring the world. I was actually amazed at how much other people on the tour bike on a regular basis. While I might do 30 miles a week, they were doing over 65.

In case you're wondering what an active vacation is like, I'm going to give you rundown right here.

Vermont Bicycle Tours really tries to take care of its guests. They arranged for a driver to pick us up at the airport in Rome and drive us to the hilltop town of Orvieto in Umbria. (The 1 1/2 hour ride was terrifying, as our driver drove as fast as possible, weaving in and out of lanes. We finally asked him to slow down.) Orvieto is an ancient town built on a flat hill of tufa.

Orvieto Highlights: Viewing the duomo with amazing carved friezes and gargoyles.
Exploring underground caves where people once lived and hid from attackers.
Walking the narrow streets filled with people out to enjoy a fall weekend.
Excellent thin crust pizza covered with fresh mushrooms and prociutto.

Bus ride to La Parrina where we stayed at Antica Fattoria La Parrina - a very old working farm with olive trees, vineyards, old buildings, and a lovely pool. The fattoria makes its own cheese and wine and grows its own fruits and vegetables. Given all this, I expected that the locally produced food would be amazing. But it wasn't. Most of the food was just really plain with not much flavor or interest. The La Parrina wine was fine, however.  The only food that impressed me was a vegetarian lasagna made with zucchini, peppers, local fresh cheese and bechamel sauce. And surprisingly, we had freshly roasted turkey with it. Delicious.

During a tour of the La Parrina shop, we were surprised to see a local man come in pulling a little wagon with two huge glass jugs with woven covers. He filled the jugs with wine using something that looked like a fire hose that came out of the wall. Wine was only 1 euro per liter when purchased that way! I wish we could do that in our country.

Bike rides that we took from La Parrina included a windy ride to Talamone - a lovely village by the sea where we had a fantastic picnic prepared by our tour guides, Luca and Robert. They used fabulous fresh foods, including the best pesto I've ever had. They also gave us wild boar salami and lovely soft pecorino cheese. Why can't we get food like that in the states?

The biking past olive orchards, vineyards, sheep, hills and plowed fields was just wonderful. Going by bike really let me take in my surroundings. It made me truly live in the moment. The best part was being cheered on by ditch diggers laying pipes by the side of the road.

The great picnic in Talamone was in sharp contrast to the truly terrible dinner we had that night at the "Ristorante il Pescatore" of Orbetello. I expected amazingly fresh seafood in this seafood restaurant by the lagoon, but it all tasted old and of very strong unpleasant fishy flavors. I asked if I could change my spaghetti with clams for spaghetti with tomato sauce, which fortunately they let me do. The tomato sauce was just OK. But the locally farmed bass, served next, was just too fishy to eat. The only part of the evening that was great was the bus ride there -- we saw a gorgeous sunset, a rainbow and lightning -- all at the same time!

The following day, we rode to Capalbio. The medieval walled village reminded me of Middle Earth. There we had aquacotta and wild boar (cinghiale) ragu on creamy polenta. The food was out of this world. Some of our new friends and we had been drawn into the restaurant al Pozzo by the aromas coming out the door. After lunch, we rode to a gorgeous beach in a park preserve near Ansedonia. We rode 6 km through a pine forest to find a path to a spectacular crescent beach - white sand, warm water of many blues and greens -- could have stayed all afternoon. But we needed to push on to Orbetello where we would be picked up.

The next day, we were taken by bus and ferry boat to Giglio Island where we explored another medieval town and went swimming at a windy, wavy beach. And my husband got to eat grilled calamari that he adored. I can't say enough about how fascinating the medieval villages are with their imposing walls, tiny streets, sturdy doors, shuttered windows, potted flowers and succulents and spectacular views. We could see the islands of Monte Cristo, Elbe, and Sardinia. 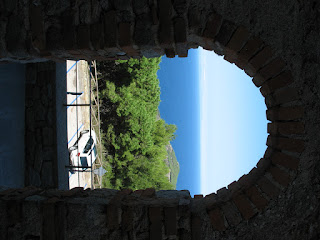 Wyn Lydecker
* I craft business plans that answer the questions investors ask most often. * Co-Author of "The Purpose Is Profit: The Truth about Starting and Building Your Own Business" and "The Startup Roadmap: 21 Steps to Profitability" - both available on Amazon. * Helped found and served on the board of At Home In Darien, a nonprofit in Darien, CT, that helps seniors stay in the home and community that they love. #AgingInPlace. * Wharton MBA in Finance and Marketing

Your Emotions Can Keep You Well!

by Wyn Lydecker Many of us believe that our emotions can make us weak. But did you know that you can use your emotions to give yo...